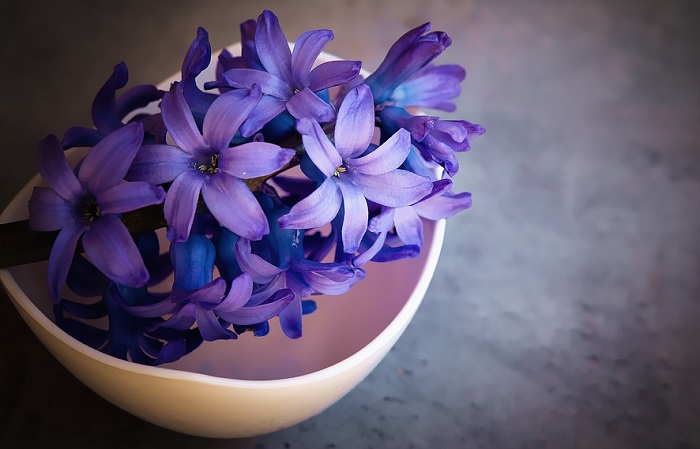 Each flower carries special meaning and symbolism within. It enriches our lives and brings in more positive energy, as everybody likes receiving a beautiful bouquet of flowers.

However, people nowadays pay a lot more attention to the meanings of flowers and which message they send to a receiver.

In this article, we will approach to you meaning, symbolism, and colors of the beautiful Hyacinth flower.

What Is the Meaning of Hyacinth Flower?

Hyacinth is world famous for its specific, humming, beautiful scent and even more beautiful appearance. It can be both cut flower or a plant in your garden, as either way it will draw numerous glances and fill in your home and garden with its captivating perfume.

The main meanings of the Hyacinth are sincerity, rashness, jealousy, or sorrow.

Hyacinth is mostly known for the sincerity it represents, so it can be a perfect gift for anyone.

Another meaning of it is jealousy, but only when we talk about the specific color of this flower (yellow).

Yellow color, in general, represents jealousy, despite its beautiful, vivid color. This means that you would have to be careful when gifting yellow Hyacinth to someone because of the message it sends. It may be that you are jealous of that person, his/her success, or that you disapprove your partner’s behavior. This is kind of bouquet you want to give to someone who won’t get the message in the wrong way.

Rashness is connected to the myth of god Zephyr, which we will explain in the future paragraphs.

Sorrow is the next Hyacinth’s meaning, as it sends a message of sorrow, especially if you pick purple colored flowers. Try to avoid it when gifting bouquets for weddings, birthdays, or any occasion that has positive context. 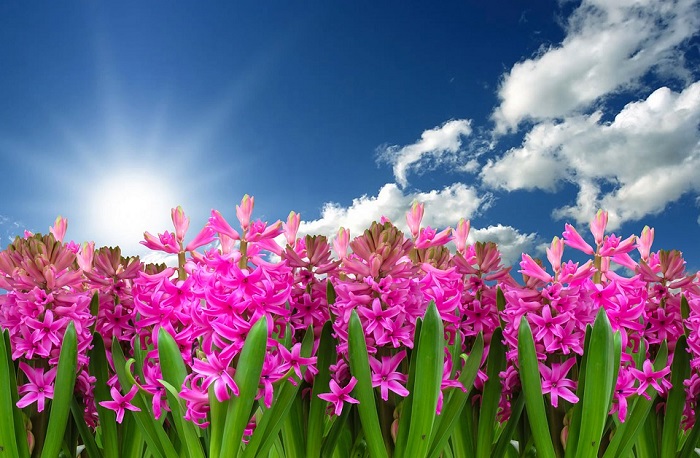 The Etymology of Hyacinth Flower

As with many flowers, Hyacinth pulls its name from the Greek language. Greeks believe that once a beautiful young man, whose name was Hyakinthos, was murdered by the Greek god Zephyr – god of the west wind.

We can relate the name of Hyacinth flower to the jacinth. This is a gorgeous, blue gemstone that has the same color as this flower. Even though Hyacinth has many different names in different cultures, it is mostly related to this gem.

The Symbolism of Hyacinth Flower

We mentioned the Greek legend about Zephyr and Hyakinthos above. Zephyr was a god of west wind, while Apollo was the god of the sun. Zephyr was jealous of the beauty of Hyakinthos but wanted to grab his attention too, as Hyankithos was close to Apollo. Apollo was teaching Hyakinthos many skills, such as throwing a disc – famous activity among the Greek in that time, which is a part of the modern Olympics games nowadays. Seeing this, Zephyr got angry and sent the winds to stop them from practicing. A strong wind was hollowing around, throwing the disc back and forth, until it went directly towards Hyakinthos and killed him.

Apollo was heartbroken over the tragedy of his close friend. After some time, a beautiful flower sprung in the spot where the young boy, Hyakinthos, died out of his blood, so Apollo gave it the name of Hyacinth. The flowers still bear the tragic history and death of the young man within but also brings the strong message about love, beauty, jealousy, and anger.

You will see many gorgeous nuances of Hyacinth flower and each of them carries a special meaning within. Before choosing the color of this beautiful flower, make sure you understand what kind of message its colors send to a receiver.

White color symbolizes purity, innocence, and sincerity in general, but white Hyacinth flower symbolizes a prayer. If you are praying for someone you love, or you want to send your support and show your heart is open, then this color is the one. It also symbolizes hope.

Even though purple is a symbol of extravagance, royalty, and dignity, this is also a color of sorrow, and in some cases symbolizes forgiveness or deep regret. As it is a bit tricky, make sure you bring the right decision when buying someone a purple Hyacinth bouquet.

Red is the color of love and passion, so we can apply it to this flower too. Red Hyacinth flower is an invitation for a game (if you want to get a bit flirty, or tickle someone a bit) and might call up someone to get more active through recreation with you.

It is a perfect flower bouquet for someone you love, as it shows off unlimited romantic and passionate feelings towards that person.

Yellow Hyacinth flower signifies jealousy in most of the cases, so be careful when gifting into someone. If you are gifting this bouquet to someone you love, make sure you two don’t have any issues or negative emotions, as it might induce further tensions. Otherwise, if that person loves yellow flowers, Hyacinth will a great choice.

Additionally, as its bright color and intoxicating perfume bring in beautiful note everywhere, you can use it to decorate your house – that way no one will get mad.

You can grow Hyacinth in your garden, or in your home – whatever suits you better. When it is fully grown, you can cut it and put in a vase in your living room or kitchen, as a bouquet of Hyacinth flowers seems lovely as decoration. Hyacinth flowers make beautiful bouquet themselves, but you can also combine them with other spring flowers and get a magnificent floral arrangement.

Hyacinth is a perennial plant, which means that you get new flowers from the old ones. Of course, you can also buy Hyacinth bulbs in stores, but make sure they are as hard as possible, as any damaged, dry, or pricked bulb won’t give you a flower.

The optimal time to plant Hyacinths is in autumn. Plant them in your garden or in pots, but always go for the best soil, which is, in this case – humus. Even though soil in your garden is of another kind, buy a bag of hummus and spill it across the surface where you want your Hyacinths to grow. As you are planting them in autumn, you should also make sure that winter frost doesn’t damage them. Go for 15-20 cm of depth and give each plant 15-20 cm of distance so it can grow fully.

When planting Hyacinth flowers, press the bulbs firmly into the soil, so there is no more space under the bulb, as otherwise – the bulbs might rotten. Hyacinth root is very sensitive and if its veins are damaged during transplantation, the plant will experience stagnation in growth, and in more severe cases – degradation and even wither.

If everything goes according to the plan, Hyacinth stem with thick leaves will flourish in spring and let out beautiful flowers. This plant grows up to 30 cm in height.

Hyacinth grown in a garden asks for a place that is not too warm, as this way its flowers will last longer, and you should water it moderately, but be careful not to over-water them nor to leave them dry.

If you have plans to plant Hyacinth indoors, in pots, then you should know the plant probably won’t flower the next year. For those who are in a hurry, make sure to plant them in the garden, and then transplant it to a pot.

Don’t cut Hyacinth after flowering, but let it curl naturally, as this way the plant will create a branch for the bulb so that the flower will grow in the spring again. The best way to protect the bulbs is to leave them in the ground, but if you still want to, then put them in a dark and cool place after removing them.

What you can do if you leave the bulbs in the ground is to dig up a bit and separate young bulbs. Taking good care of Hyacinth bulbs will give you the first flowers in about two to three years after planting.

If you are growing Hyacinth in pots, then cut off the stems with sharp scissors after the growing cycle finishes. Be careful not to damage the leaves, because plants still need them. It is just enough to leave the pot in a sunny place, fertilize it, and water once in two weeks. If the leaves get yellow and dry, then you will know that your Hyacinth has enough energy for the winter. Now it is the right time to cut off dry leaves, remove the bulbs from the pots and store them in a dark, cool, and dry place.

Taking good care of Hyacinth will give you wonderful flowers each year in your garden or your home. Hyacinth flowers will take in beautiful spring scent in your home and decorate it with vivid colors.

Hyacinth is considered as a symbol of sport and sports activities among the ancient Victorians.
Hyacinth hides a secret message within – always be playful as life can be an endless pool of happiness if we want to see it that way. Have hope and vision for every tomorrow, but don’t get preoccupied with things that are non-essential. Hyacinth tells you to enjoy life because there is only one chance to take here, out of which many other chances can grow if we know to recognize the good.

This flower is related to the lilies and belongs to the Asparagaceae family of plants.
The most beautiful Hyacinth flowers grow in Iran and Turkmenistan, right next to the Caspian Sea, making a magnificent spring garden. Here you can see soft baby blue Hyacinths, indigo blue, burgundy, lilac, and orange ones.

Fresh bulbs of Hyacinth might be poisonous for the skin, so make sure you wear gloves when touching them.

Ancient people used Hyacinth to make glue or to stop bleeding. If you mix the Hyacinth juice with lemon juice, this mix might reduce inflammation.

If you want to send a strong message to someone that will symbolize a fresh start, ask for forgiveness, or express support and hope for success, Hyacinth flowers bouquet is the right way to do that.

Don’t forget to live life to the fullest and be playful and active – that is the main message Hyacinth sends.